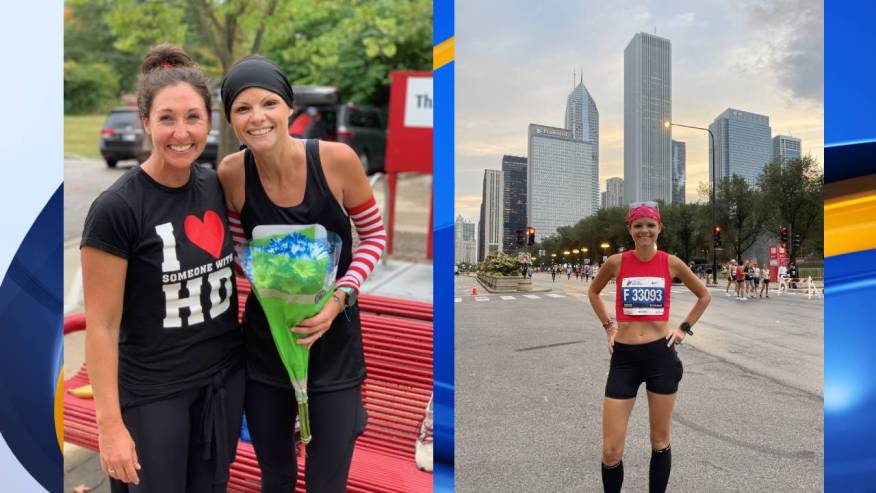 INDIANAPOLIS — People will do just about anything for the people they love.

In the case of Fishers High School nurse Heidi Heeke, that means running 26.2 miles at the Chicago Marathon and raising $3,000 to support her best friend.

Jessica Ondell, Indiana chapter president of Huntington’s Disease Society of America (HDSA), had lost her mother in 2002 to Huntington’s Disease and later discovered her sister had that same disease. Huntington’s Disease is a rare, terminal genetic disorder that leads to the progressive breakdown of nerve cells in the brain. As a person’s physical and mental abilities deteriorate, the symptoms are described as having ALS, Parkinson’s and Alzheimer’s simultaneously. There is no cure, and it’s devastating.

When Heeke signed up for the Chicago Marathon, she signed up as a runner for HDSA, for Ondell’s sister, will all money raised be given back to HDSA. Just as all donations, the money will go towards helping provide services and referrals to Huntington’s Disease families living with the effects of the disease, as well as growing their advocacy and educational programs to increase access to appropriate care.

To prepare for the marathon, Heeke would run every morning at 4 a.m. for five days a week, as well as a lot of spaghetti and other carb-filled dinners. She had done half-marathons before, but this was the first time she ever ran a full marathon, let alone in Chicago, and despite her nervousness, the marathon was successful.

“It was amazing. It was an amazing day; it could not have gone better,” Heeke said. “Jessie even jumped in at I think it was mile 23, and ran two to three miles with me to get me pretty close to the end, and then I finished on my own. I couldn’t have asked for a better day. I will never forget it.”

She isn’t the only one that won’t forget it.

“I was very overwhelmed with emotions, very grateful,” Ondell said. “Huntington’s Disease is a rare disease, so a lot of people don’t know about it. And you know, there’s not as many fundraisers for it on a large mass scale. So I was really appreciative that she chose to run for a smaller charity.”

Heeke will be running for HDSA again next year, hoping to raise $5,000 or more this time, whether that be with raffles, wine baskets or other creative methods. She hopes more people get involved, but if nothing else, she said she doesn’t think she would ever run without fundraising for Huntington’s Disease again.

“Jessie is my absolute best friend. … She is, for lack of better words, my person,” Heeke said. “So when I decided to run the marathon, it was just an easy choice to decide to do it for charity and raise money for such a great cause.”